Proximus Group closes 2019 with financial results in line with guidance, driven by solid commercial performances and good cost control throughout the year

Through sustained customer growth and continued strong focus on reducing our costs, we delivered full-year results in line with our guidance.

Supported by our appealing year-end campaign, we maintained a good customer momentum for Internet, TV and Mobile postpaid in the last quarter of 2019. Our segmentation strategy again proved successful in a very competitive market, with a growing number of Households signing up for converged offers, with especially the EPIC and Minimus packs having strong traction. By end-2019, over 60% of our Household customer base was convergent. In spite of an increasing number of “skinny bundles” offered on the market, we kept a strong position in the low-end segment through our Scarlet brand, with its attractive no-frills offering appealing to customers looking for the best prices.

Building on our ambition to become a truly digital-centric organization, addressing the digital needs of our customers and creating content-centric experiences, we launched My e-Press with the newspapers Het Laatste Nieuws and Le Soir on 1 December 2019. At the same time, we are vigilant with regard to preserving competitive Mobile pricing and announced an enrichment of our Mobile bundles as from 1 January 2020.
We maintained a strong position in an increasingly competitive Enterprise market. We achieved a further increase in our mobile base, despite high mobile pricing pressure. To remain successful, we continue to reinvent ourselves. Therefore, to unlock the digital potential of our enterprise customers, we launched Proximus Accelerators, a collaborative ecosystem of Proximus subsidiaries with highly specialized digital IT experts. They help companies in their digital transformation by creating fully integrated ICT support.

Our overall focus on digitalization also translates into a lower cost base for our Domestic operations, with, amongst others, a 20% decrease in calls towards our call centers.
As a result, we delivered over the year 2019 a slightly growing Domestic EBITDA.
For BICS, the solid progress in direct margin thanks to volume growth in A2P messaging and TeleSign’s mobile identity business was offset by higher expenses to fuel the growth of TeleSign, and by the progressive insourcing by MTN, be it in a limited way so far.
As we anticipated, the 2019 Group EBITDA therefore ended stable at + 0.3%.

With the agreement concluded with the majority of the Unions on the Fit for Purpose transformation plan, we can continue to build the future of Proximus, developing the right digital skills with specific programs for the reskilling and upskilling of our teams. The agreed-upon workforce reduction is managed through a specific process, starting with a voluntary leave plan for which 1,347 FTEs have signed up. A very limited number of involuntary leaves is expected at the end of the internal mobility and requalification process, which started early February. The period of uncertainty has not been easy for many of our employees, and we are thankful for their continued commitment. We now start a new chapter, working on the future of Proximus with positive energy and ambition.

We operate in a fast-changing market, with shifting customer expectations, fast technological progress and growing competition. In view of the challenges we face, we are working hard on further defining our strategy going forward. I’m looking forward to sharing the outcome at our Capital Markets Day and Press event scheduled for 31 March 2020 in Brussels. At that time, we will also provide you with a view on our financial outlook and the shareholder return.

In a highly competitive setting, Proximus continues to attract customers for Internet, TV and Mobile Postpaid

In a challenging market, with competitive intensity increasing during the typical year-end promotional period, Proximus continued to enlarge its customer base for Fixed Internet, TV and Mobile Postpaid. Furthermore, Proximus further grew its convergent customer base driven by its successful segmentation strategy. With Scarlet, the Group also maintained a strong position in the no-frills segment of the market.

The Enterprise segment realized a further extension of its mobile customer base, although the revenue this generated was impacted by competitive price pressure. Proximus closed the year with continued growth in ICT and Advanced Business Services as well as an ongoing strong increase in Machine-to-Machine cards. 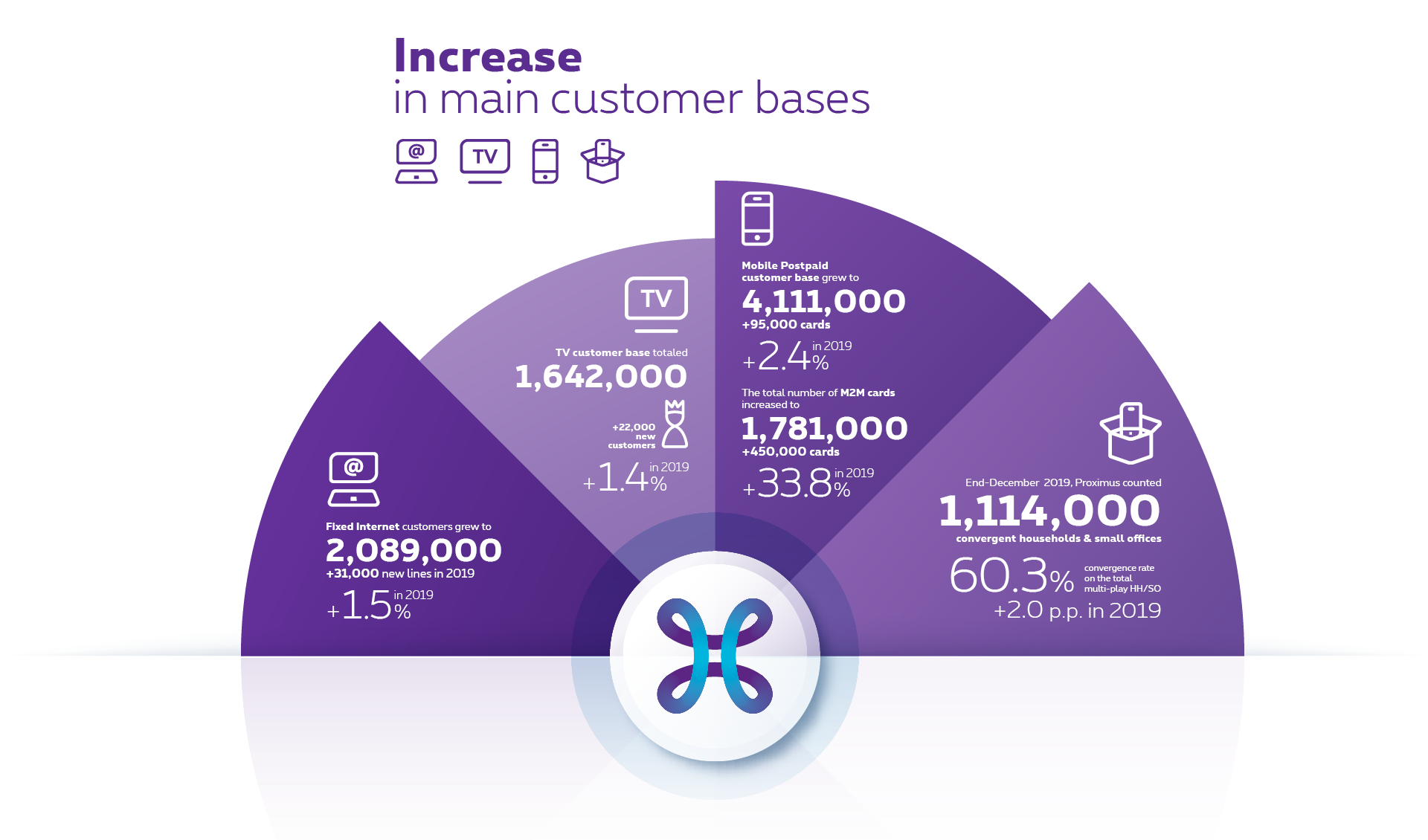 Over the year 2019, underlying revenue from Proximus’ Domestic operations totaled EUR 4,386 million, a year-on-year decrease of 1.7%. Excluding devices, the Domestic underlying revenue ended 1.2% below that of the prior year. The revenue was negatively impacted by the regulatory impact on Fixed Termination and International calling and texting rates. Furthermore, Proximus’ revenue was pressured by the ongoing erosion of its Prepaid and Fixed Voice base and by lower Mobile inbound revenue, which were not fully compensated for by the growth in Internet, TV, ICT and Advanced Business Services.

With EUR 3,348 million, Proximus’ 2019 Domestic underlying direct margin ended 0.5% below that of 2018. The year-on-year variance was impacted by a negative effect from the regulatory measures. This regulatory headwind was offset by the positive effect of Proximus’ customer growth and higher margin achieved in ICT and Advanced Business Services, including the benefit from acquired companies.

Driven by its good cost control, Proximus posted a 0.4% progress for its Domestic underlying EBITDA to a total of EUR 1,718 million.

BICS posts a 2.4% direct margin increase for 2019, while its EBITDA ends slightly lower due to an increased cost base in growth domains

The direct margin of BICS increased by 2.4% year-on-year to total EUR 325 million for 2019. This was driven by BICS’ non-Voice services direct margin which benefitted from the BICS-TeleSign combination, with growing SMS A2P volumes, Telesign’s mobile identity business and the realization of direct cost synergies. This was only in a limited way offset by the impact of the gradual insourcing by MTN, with the effect coming through slower than expected.

BICS closed 2019 with an EBITDA of EUR 153 million, 0.5 % below that of the prior year. This resulted from an increased cost base to support its growth areas and a minor impact of the gradual insourcing by MTN.

Over the year 2019, the underlying revenue of the Proximus Group totaled EUR 5,686 million, a decrease of 2.1% in comparison to the previous year.

Proximus’ Group underlying operating expenses for the full year decreased by -0.8% to EUR 1,802 million in 2019, supported by strong focus on a structural improvement of the Domestic cost base, by means of efficiency and digitalization.

For the full-year 2019, the Proximus Group underlying EBITDA totaled EUR 1,870 million, 0.3% above that of the prior year. This excludes EUR ‑278 million incidentals mainly recorded in the framework of the Fit for Purpose transformation plan and the early leave plan ahead of retirement and includes lease depreciation and interest for EUR 84 million.

Proximus posted a full-year 2019 Free Cash Flow of EUR 498 million. Excluding cash-out for acquisitions, the normalized FCF was EUR 504 million, fairly stable in relation to the EUR 501 million for 2018. The higher cash needed for Business working capital, payments done in the 2016 Early Leave before Retirement restructuring plan, and less proceeds from building sales, was offset by lower cash-out for income tax and interests, less cash needed for Capex and a positive evolution in underlying EBITDA.

In line with its expectations, Proximus invested a total amount of EUR 1,027 million in 2019, which is stable in comparison to the EUR 1,019 million invested in 2018. With Proximus’ Fiber for Belgium project ramping up, it consumed a larger share of the yearly capex envelope. The deployment of this future-proof network kicked off early 2017, and by end-2019, inhabitants of 13 cities were being connected to Fiber. In addition, Proximus also invested extensively in its IT platforms, the ongoing multi-year modernization of its transport network and attractive content for its TV customers. To deal with an ongoing steep increase in mobile data traffic, Proximus also invests to ensure a top-quality mobile network for its mobile customers.

Proximus reported full-year 2019 financial results in line with its guidance.

In view of the scheduled Capital Markets Day on 31 March 2020, during which the company strategy over the next years will be explained, the forward-looking financial guidance and shareholder return will be addressed at that point.

Shareholder return over the result of 2019

On 20 February 2020, the Board of Directors approved to propose to the Annual General Shareholder meeting of 15 April 2020 to return over the result of 2019 a gross dividend of EUR 1.50 per share, of which EUR 0.50 interim dividend per share was paid in December 2019.

This brings the total declared dividend over the result of 2019 to EUR 486 million.