Proximus is running an esports cave in Antwerp this month

In May, Proximus announced the launch of three official esport competitions. ESPORT TV recently became exclusively available on Proximus TV (channel 71). And from 4 to 31 August, Proximus is running an esports cave on the Meir (no. 16) in Antwerp: everyone is welcome free of charge to enjoy the esports atmosphere and practice for the competitions.

In May, Proximus announced that it would play an important role in developing esport and partnered up with ESL (Electronic Sports League) and the Pro League to set up three official competitions.

What is the esports cave? 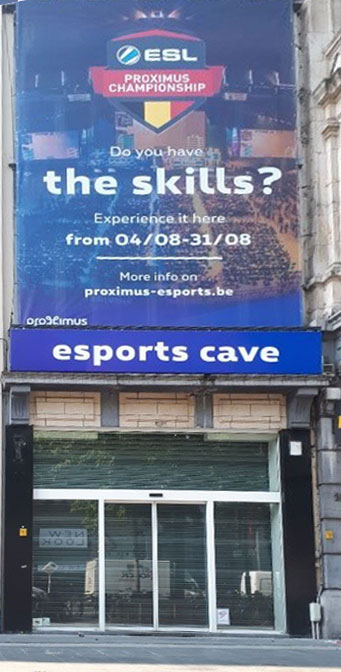 In August, Proximus is running an esports cave, a place where you can get acquainted with esports. Here you can also meet esports fans and experience workshops with pro players. You can game in a relaxed atmosphere, with the best technology and in the best conditions.

There are PCs and Playstations on which you can practice for free for the various competitions: League of Legends, Counter-strike Global Offensive and FIFA.

And in the lounge, over a drink, you can watch the top competitions on ESPORT TV, the channel which recently became available on Proximus TV (channel 71).

The esports cave on the Meir no. 16 in Antwerp will open at 12 noon on Saturday 4 August. It will be open until 31 August, on all days of the week (except Sundays and Mondays) from 12 noon to 8 p.m., and even to 11 p.m. on Fridays and Saturdays.

In addition, professional players and influencers will give workshops, not just in Antwerp, but also in Ghent, Brussels and Charleroi. A variety of subjects will be dealt with and you can sit alongside the likes of the Brussels Guardians, Zakaria Bentato or former Sector One Gamer Fedorspan.

Detailed information is available on www.proximus-esport.be.