Determined to play a leading role in accelerating the electrification of the Belgian car fleet, Proximus intends, with a partnership model, to provide at least 15,000 additional charging points for electric vehicles by 2028

The pilot project is part of the ongoing rollout of fiber, which frees up space in the street cabinets. Proximus intends to re-use this spare capacity as part of its commitment to a sustainable society. These street cabinets also provide interesting advantages. On the one hand, the existing infrastructure allows the cabinets to be easily converted into charging points: electricity is already present, which limits the excavation work. On the other hand, they are often located in attractive city centre locations, which makes it possible to provide access to residents who do not have charging infrastructure at home.

The installation of this kind of new charging points will shortly start in Oudenaarde, with 5 new charging stations planned. This is the continuation of the pilot project started in Mechelen.. In total, 25 public installations should be put in place in 2022.

According to Lydia Peeters, Flemish Minister of Mobility, there should be 100,000 (semi) public charging stations in Flanders alone by 2030. An initial analysis by Proximus shows that at least 4,000 locations in Flanders qualify, accounting for at least 8,000 public charging points. Several thousand more charging points could also be added in the rest of the country. By doing so, Proximus is following in the footsteps of similar initiatives already launched in the United Kingdom and Germany. The goal is to reach full capacity by 2028.

With its digital services and network expertise, Proximus wants to make the difference

Proximus is in advanced discussions with several potential partners who are prepared to develop a common vision for fast expansion. For this purpose, the company is not only looking for cooperation for the above-mentioned public domain, but also for parking lots in the semipublic and enterprise domain where charging-as-a-service will be offered to companies, as well as to hospitals, sports clubs, cultural centres, etc. This will enable companies to offer charging stations to their employees and customers, as well as to the general public, before and after opening hours. Proximus is in talks with various parties and the envisaged partnership should be finalised by the end of the summer.

In addition, Proximus already has several services that tie in with the charging stations narrative. With 4411, it already has a prominent presence in the mobility sector, but now also with Aug-e (joint venture with BESIX) there are several synergies to be found, including balancing energy capacity across different charging points depending on price, location or grid constraints. The pilot project in Mechelen showed that, in terms of availability of the charging points and existing digital services, the market is still in its early stages. Proximus aims to provide added value here thanks to its current ecosystem and experience as a network operator.

With this imminent partnership, we have the aspiration to play a leading role in the electrification of the Belgian car fleet which is totally in line with our strategic vision on green energy and circularity. With our present street cabinets, Proximus can already contribute a great deal to addressing the shortage of charging points, while also doing its bit for a circular economy. But we want to take it a step further and exploit other synergies in this market. With our current expertise as a digital player and in providing uninterrupted connectivity throughout our network, we hope to offer, with an appropriate partner, the best charging experience in the market.

I can only welcome this initiative, which addresses the growing need of charging infrastructures. By 2030, we want to have 100,000 (semi)public charging stations in Flanders alone for citizens who opt for electric vehicles. That is why I am pleased that a player like Proximus supports this ambition and will give a boost to the availability of charging stations in the years to come, both with its street cabinets in the public domain and its cooperation in the semipublic and enterprise domain.

Europe wants to ensure that from 2035 onwards, no cars are sold that run on fuel at all, and the federal government is also fully committed to the electrification of the car fleet, including through taxation. There will therefore be more and more electric cars on the road, making sufficient charging infrastructure essential. The ambition of Proximus and its various partners fits in perfectly with this. If, thanks to Proximus and its partners, more than 15,000 charging stations are installed by 2028, there will be more opportunities to charge. That can convince people to opt for an electric car and thus reduce emissions. That is to the benefit of everyone. 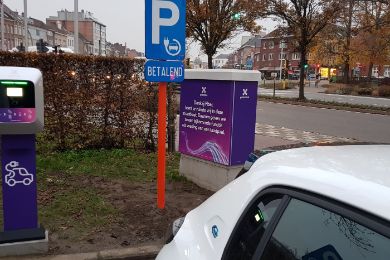