White zones set to disappear from the German-speaking Community of Belgium: optical fiber will be available throughout the region by 2026

On Thursday, September 29, the government of the German-speaking Community of Belgium, Proximus and Ethias finalized the public-private partnership announced last May. They are pleased to announce the creation of "Glasfaser Ostbelgien", a joint venture based in Eupen, tasked with rolling out optical fiber throughout the region within the next four years. Thanks to this agreement, a first of its kind in Belgium, almost all of the 40,000 homes and businesses in the country's nine German-speaking municipalities, including in the so-called "white zones", will have access to the best in broadband. The rollout will take place from 2023 to 2026, and will provide opportunities for local companies to participate.

This time, it's official: the entire territory of the German-speaking Community of Belgium will be covered by optical fiber by 2026, even its most rural areas, thus providing citizens and businesses in the region’s nine municipalities with very high quality Internet access. With its unparalleled speeds and exceptional customer experience, fiber is considered the broadband technology of the future. As it uses less energy and has a longer lifespan than any other fixed Internet technology, it is also more environmentally friendly.

This large-scale rollout will be possible thanks to the first public-private partnership in Belgium in the field of fiber. After signing a memorandum of understanding last May, the agreement was finalized today by Guillaume Boutin and Philippe Lallemand, the CEOs of Proximus and Ethias, and by Minister Isabelle Weykmans, on behalf of the government of the German-speaking Community of Belgium. It paves the way for the creation of a new company based in Eupen, under the name "Glasfaser Ostbelgien", tasked with overseeing the proper rollout of fiber over the next four years, using local companies as much as possible. It will be jointly controlled by Ethias (50% + 1 share) and Proximus (50% - 2 shares), and the German-speaking Community (1 share) will be present to guarantee the public interests of the company.

A 15% reduction in "white zones" in Belgium

The work is set to start in 2023. Before that happens, this public-private partnership must first receive the green light from the European Commission, which should be the case by the end of this year. The objective of Proximus, Ethias and the German-speaking Community of Belgium is then to deploy fiber throughout the region by 2026, starting with the municipalities of La Calamine and Amblève. From day one, this network will also be open to all other operators under non-discriminatory conditions.

While, so far, fiber has been mainly rolled out in cities, this agreement makes it possible to go one step further by also covering more rural areas, thanks in particular to the subsidies of the German-speaking Community - supported by funds from the European recovery plan - up to 40 million euros and to the financing of Ethias. With this project, it should be possible to reduce the number of "white zones" in Belgium by 15%, in line with the stated ambition of the Federal Government and Minister Petra De Sutter.

Minister of Culture, Sports, Employment and Media in the Government of the German-speaking Community

The public-private partnership is an important step in our project to deploy a fibre optic network for the citizens and businesses of the German-speaking Community. A unique model project in Belgium and in other rural regions for the benefit of our citizens, which is made possible by the autonomy of the German-speaking Community. This public-private partnership provides the basis for covering our rural region by the end of 2026 with the most efficient network technology and thus laying the foundations for the digital transition. This is the best guarantee for the future of our living and economic region. The deployment of fibre optics, which will be carried out with the greatest possible number of local companies, will decisively advance our region. In this context, the government is sticking to a rollout covering 100% of the territory. The innovative partnership with Proximus and Ethias already allows us to cover 98% of our territory by the end of 2026. Building on this network, we will develop other projects to cover the remaining 2%.

Proximus has always been an important partner for the inhabitants and businesses of the German-speaking Community. I am therefore delighted to see this ambitious project come to fruition, which will bring the benefits of fiber to almost all households, even in those areas that have had very little broadband coverage up to now. I am convinced that it is only by working with public-private partnerships such as this one that Proximus will be able to cover the whole of Belgium with a gigabit network. I also hope that the example of the German-speaking Community will inspire other public authorities to opt for similar partnerships in the years to come. This could be a huge step forward for the digitalization of the whole of Belgium.

As their leading insurer, Ethias is a long-standing partner of public services. This public-private partnership, in this case with the German-speaking Community (shareholder of Ethias through EthiasCo) - and whose public institutions and municipalities are also our affiliates - shows our desire to further strengthen this unique relationship based on societal proximity in Belgium and to play a major role in the digital transformation. While nothing can match face-to-face interaction between humans, the recent health crisis and climate issues have highlighted the importance of being able to effectively connect remotely, in all circumstances. Thanks to this direct investment in the local economy, we are delighted to be able to help make a real difference to the day-to-day life of tens of thousands of citizens. Investing in long-term, innovative projects with a high societal value is fully in line with our DNA and our sustainable investment strategy. 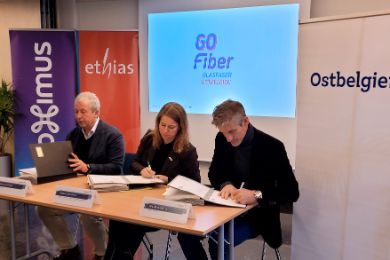 Signature of the agreement